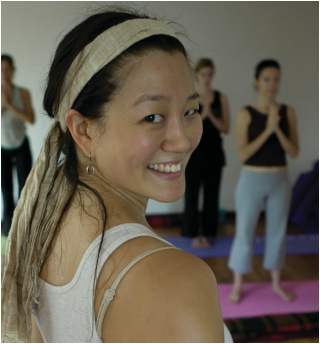 Basic biography:
Mimi Kuo-Deemer is dedicated to living, sharing and evolving the art of xiu yang（修养),  or the Chinese art of self-cultivation, through yoga, qigong and mindfulness meditation. An author and teacher of both students and other teachers for over 20 years, she champions the balance of playfulness and precision as the best way forward in life, and never underestimates how sitting, breathing and conscious movement can provide the clearest and most compassionate perspective on the messy, complex and often unpredictable job of being human.

Her two main teachers in the yoga world, Erich Schiffmann and Donna Farhi, continually humble her with the idea that toga is the art of living, listening, and learning to embody a deeply spiritual tradition.  Martin Aylward and Mark Coleman, her mindfulness meditation teachers, have helped her remember that it's possible to be present with kindness and care in each moment. Her qigong practice, inspired by her own curiosity and love for Daoism and the Chinese Five Elements, emerged as a complimentary and distinct practice alongside her love of yoga and meditation.

In 2002, Mimi co-founded Yoga Yard, Beijing’s first and leading yoga studio, which she co-directed for seven years before moving to the UK.   She lives in Oxfordshire but teaches primarily at London's triyoga, where she co-teaches on their two year teacher training diploma course as well as runs immersion trainings.  She is also a contributor on movementformodernlife.com.

Mimi is a graduate of Stanford University and SOAS, University of London, where she earned a masters with distinction in 2016 in Traditions of Yoga and Meditation.  She has published a number of yoga and qigong DVDs/videos with New Shoot Pictures, is part of the London-based literary agency, Madeleine Milburn.  She published her first book, Qigong and the Tai Chi Axis in December, 2018 (Orion Spring), and will publish her second, Xiu Yang: Self-Cultivation for a Happier, Healthier and Balanced Life (Orion Spring),  in June, 2019.  In addition to teaching and writing, Mimi also helps run the Glow Fund charitable trust  –  a charity she and her husband established that helps disadvantaged Chinese and ethnically Tibetan children with severe orthopaedic conditions receive life-changing operations.
Mimi Kuo-Deemer is a trading name, and provides yoga, qigong and mindfulness classes, workshops and teacher training.
​Daoist Flow Ltd.  provides yoga retreats and residential courses under the umbrella of Mimi Kuo-Deemer .

Where it all started
The first time I practiced yoga was in 1995, fumbling through the postures with my mother's photocopied book from the 1970's. My mother knew I loved dance, and thought I'd like this movement-based health system she'd been doing on her own for years. She also recognised that I wasn't very well; I was an overworked, stressed-out, asthmatic photographer living and working in Beijing. The Yoga poses I did started to reverse my compromised health, and I quickly began feeling stronger and more revitalised.

​I often look back at the first time I practiced from that book; I didn't know it then, but yoga did more than give me my health back – it started putting things in perspective. By cultivating a type of physical awareness that wasn't based on how I looked while doing it (like dance had trained me to think), I started to pay closer attention to my thoughts, emotions and sensations.  As I learned to explore my body's possibilities and limitations on my mat, I began to treat myself and others with more respect and compassion.  I eventually discovered that yoga made me happier.  It helped break down a lot of negative ideas I had about myself that simply weren't true.  In other words, yoga made me feel more comfortable in my own skin.

These days I no longer photograph professionally, but I feel as though yoga has helped me see more clearly.  Alongside my love of yoga and meditation, I also have been practising a mixture of medical, spiritual and martial forms of qigong that is influenced by a keen interest in Daoism and the Chinese theory of Wuxin, or Five phases/elements.  To me, yoga, qigong and meditation represent the art of being, feeling, creating and learning. They help me feel more awake, alive and able to love.